Why We Care About Litter

On a sunny day in 2007, Peter Cruwys sat in a taxi, on route with his mates to Sydney’s iconic Royal Randwick Racecourse.

It was a time of reflection for Peter, who had just returned from a five-year stint in Dublin, Ireland, working as a national sales manager for Europe’s largest coffee and vending machine manufacturer. Facing an uncertain future, he was overcome by a moment of beauty as his taxi passed the picturesque Sydney Harbour Bridge on the Cahill Expressway.

It was then that Peter knew he was privileged to live in such a special part of the world. But Peter’s excitement soon dwindled upon seeing the boorish behaviour of racecourse revellers. As he looked on, Peter observed plastic champagne flutes being dropped on the ground with no regard for their end destination. 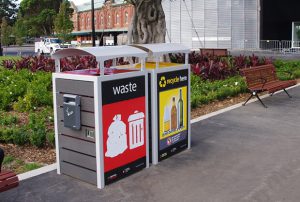 “It felt like there was just this subconscious ability to litter and it was just done so easily. No one thought about what they were doing or even bothered to look for a garbage bin, they were just dropping their waste onto the ground,” Peter explains.

“Europe was miles ahead at that time with regards to resource recovery, recycling and diversion. It seemed so easy over there and it was done almost automatically by everyone. We as a society were making it difficult for ourselves, as we just didn’t think it was as important as it should be.”

He notes that in the UK, residents are able to source separate waste into 11 different waste streams depending on the municipality, while Australia tends to rely heavily on materials recovery facilities to sort this out. The success of source separation results in cleaner recycling streams he explains, which means recycling becomes a higher valued business.

Peter’s observations inspired him to offer a simpler solution to the waste industry. He sought about borrowing ideas from the US and UK to develop simple physical collection systems that would inspire consumers to do the right thing. One of Peter’s first steps was to introduce a compostable bag and Kitchen Caddy to target food organics diversion in the domestic environment. His experiences overseas had taught him that colour coding and educational messages were key to targeting consumers.

In 2007, Source Separation Systems was launched at the Coffs Harbour Waste Conference, bringing an initial range of residential, commercial and public place source separation solutions to the local government market, including the Kitchen Caddy and Compost-A-Pak range of liners.

Ten years later, Source Separation Systems’ focus is still on innovation, as Peter works to introduce new systems to Australia and refresh their existing products, with the aim to ensure their best practice solutions meet their clients ever-changing needs.

Three years ago, Peter turned back to the Kitchen Caddy, looking to refresh a now established product. After discussions with many local government customers and focus groups and internal planning, the second generation Australian-made Kitchen Caddy was launched. In what the company believes was an industry first, an in-mould label allows councils to customise the lids to suit the organics they are targeting. Source Separation Systems designed the in-mould label akin to a marketing flyer, featuring full colour detail, customised logos and photos.

The resulting product improves on education – a key priority for Peter. Detailed messages are presented to the user every time they divert waste, which are then reinforced with full colour graphics, a change proving very beneficial in multicultural communities. In addition, the company also incorporated a rear mounting tab so the unit can be attached to a wall or under-sink door and venting channels, making it easier to remove the liner and waste. Research supports the claim that simplicity and convenience influence recycling habits. A 2008 report by the Organisation for Economic Co-operation and Development (OECD) investigated influences of consumer behaviour and recycling, analysing numerous studies over the past few decades to gauge the trends. As early as 1993, a study by Judge and Becker, looked at 1000 homes in Minnesota, US, taking a random 20 per cent sample of participants and found convenience factors increased recycling, which comprised more frequent collection and lower sorting requirements. This included sorting recyclables into separate containers for glass, plastics, newspaper and metal or commingled.

Source Separation Systems also sought to design its products to meet the Australian Standard AS4123.7-2006, developed in 2006. The standard provides colour specification, markings and designation requirements for mobile waste containers in order to boost recycling outcomes. The standardised system is aided by the fact that the colours support educational messages run by local government authorities and are widely used in public domains. It was developed by the Waste Management Association of Australia in collaboration with its New Zealand counterpart. From its MultiSort Lid systems to National Park Bins, the Australian colours of red (waste) and yellow (recycling) used in Source Separation Systems products provide a key message to consumers, which is then reinforced by other design aspects such as apertures and signs.

Over the past 10 years, Source Separation Systems expanded its range of products across the commercial, hospital, campus and outdoors spaces. While there’s been numerous products rolled out, Peter says the National Park Range released in 2013 were one of the highlights.

Litter is expensive to manage and PricewaterhouseCoopers Packaging Cost Benefit Analysis 2011 report shows governments are spending up to $350 million each year to curb the problem.

The National Park Range, which houses 140 or 240-litre mobile garbage bins, was designed for municipalities to fully customise to suit their individual communities. From educational messages to historical photo collages, the bins aim to instil a sense of community and thus ensure waste is disposed of responsibly. Peter’s decisions are backed by the literature, as the NSW Government report, Lessons from the litter-ature, A review of New South Wales and overseas litter research shows. The research found the more community involvement and social engagement there is, the greater the anti-litter strategy becomes. Furthermore, the amount of litter already in a space can be a powerful determinant of behaviour. Convenient placement of bins also has an effect, it notes.

Another key point the review identifies is the concept of place attachment. Psychologists describe the concept as an emotional attachment  to a location, with findings to suggest those who harbour higher levels of place dependence and identity are broadly connected to environmentally responsible behaviour. In other words, our association and desire for a place means we’re more likely to want to keep it clean.

NSW’s Newcastle City Council and Hornsby Shire Council took this approach in the design of their National Park Bins. In Newcastle, each recycling system displays local photos of the area and display messages such as “Why we love Newcastle”. Hornsby Shire Council conversely contains messages such as “Hey tosser, it’s a dirty look” which reinforces the impact of litter in the community.

“Because the National Park Bins are a relatively attractive looking bin, they’re also less likely to be vandalised,” Peter adds.

“We did a project with Great Lakes Council where they put the bins in a skate park and photographed the kids using it and put them on the side of the bins. The kids ended up cleaning up the skate park, picking up the litter and putting it back into the bins.”

THE RISE OF SINGLE-STREAM RECYCLING

The buzz about the lack of recyclability of coffee cups last year led to the development of the Coffee Cup Separation Station in August of last year. Our penchant for a morning coffee fix means that approximately three billion single-use coffee cups are sold in Australia each year, with most ending up in landfill, according to consumer group Choice. Source Separation Systems believes it’s largely due to the lack of recyclability behind the cup design of conventional systems, which is lined with a thin coating to make the paper waterproof. The small amount of plastic lined with paper on the outside means at this stage it is unable to pass through common recycling procedures. The Coffee Cup Separation Station forces consumers to separate their cup, liquid and lids, thus preventing contamination and ensuring the material travels to a recyclable destination. The Coffee Cup Separation Station has been designed for use in shopping centres and commercial offices so that when people are coming into those centres they’re actually thinking about what they’ve purchased,” Peter says.

“It looks like a massive coffee cup, and is designed to start the conversation about the lack of recyclability, as well as being a recycling bin for components where technology allows.”

While up to 60 bins have been deployed across centres across Australia, the next step is for industry to shore up the funds to invest in increasing dedicated coffee cup recycling infrastructure.

“ResourceCo is at the moment one company recycling the cups into briquettes in concrete cement kilns,” he says.

“We need to have a greater understanding of how to recycle these cups and more infrastructure. There are some states that have recycling abilities such as the ACT and Queensland.”

Peter hopes that there will be a further push towards industry-specific infrastructure in order to boost the commodity value of individual recycling streams, as a cleaner stream results in a higher valued product.

As Source Separation Systems waits for the market to expand, Peter attributes the success of the company in its ability to experiment and take bold risks.

When a business or government entity requests a commercial design, Source Separation Systems collaborates with its clients to offer an engaging solution in line with best practice waste diversion. Not every risk pays off, but when it does, the company is able to boost recycling outcomes.

“We’ve developed a number of projects solely because the customer requests it. If we think it’s a worthwhile project, we’ll take a gamble and bring it to market,” Peter says.

HOW TO MAKE IT EASY

With a range of competitor source separation products out there, Peter sees the company’s unique selling point as its ability to offer a colourful, eye-capturing product with differing apertures.

He says that when it comes to bin design you have to consider apathetic consumer sentiment, with special considerations made in this area. For these reasons, Source Separation Systems restricts its recycling apertures, which aims to reduce contamination.

In a study published in the journal, Environment and Behaviour, It matters a whole lot, two sets of three bins were positioned in an academic One possibility identified is that recycling is regarded as a socially desirable practice and specialised lids implicitly remind individuals to comply with this norm.

“If you’ve got apertures that are all exactly the same colour and size, and you’ve just got landfill or recycling text, you’re not really making people think,” Peter says.

In a twist of redemption, seven years later Peter returned to the same location where the idea for his business all started, but this time with a nobler purpose.

“Funnily enough, six years later we did all the bins for the Australian Turf Club, when they spent about $150 million rebuilding Randwick Racecourse,” he says.

“It was really rewarding to be back at Randwick, and see both the powerful difference our systems can make, and also the underlying change in Australia as so many of us move to embrace a more sustainable way of living. Now with a young family, it’s something I’m only becoming more passionate about.”