This article was originally published in Waste Management Review.

Australians love new technology. As a nation of early adopters, we embrace new devices and technology faster than most other developed countries.

But with it comes a throw-away attitude. There is an increasing trend, fuelled by consumption, reducing product lifecycles and limited repair options, for end-of-life technology to be dumped in landfill. In fact, e-waste is the fastest growing component of council solid waste, growing about three times the rate of other streams. 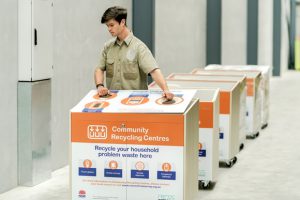 While e-waste is well acknowledged as a pollutant that should be diverted from landfill, there is growing recognition that finite resources such as tin, nickel, zinc and copper should be recovered as Australia transitions to a circular economy.

The Australian Government is pushing Product Stewardship with the National Television and Computer Recycling Scheme, which mirrors well established programs such as Mobile Muster in acknowledging the shared responsibilities of lifecycle management for those involved in manufacturing and selling products. Many local councils are also playing a key role in separating e-waste, in part supported by EPA grants.

Peter Cruwys, Managing Director of Source Separation Systems, says that to achieve a circular economy, processing e-waste needs to be cost effective and the separation of waste streams into uncontaminated, consistent streams is imperative.

He says there has been a shift away from traditional battery recycling tubes to more customised solutions. 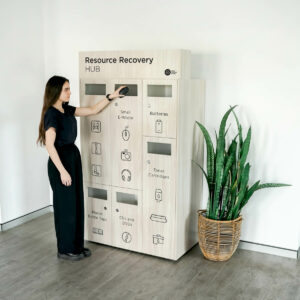 “There is definitely a change in the way businesses are thinking about problematic waste. The industry is maturing, and sustainability managers understand that if they can collect consistent items in bulk with no contamination, the ‘waste items’ have an increased value which can be recovered,” Peter says. “As such, we are increasingly manufacturing recovery hubs, which are much more customised for each location.”

Peter believes optimising recovery and demonstrating leadership in product stewardship is driving the push for customisation.

“Employees and communities want to see businesses take more responsibility for the waste they initially manufacture and create, beyond just traditional streams,” he says. “Solutions such as our customisable Recycling Wall Hub meet that need.”

“The Recycling Wall Hub means organisations can easily support e-waste programs such as Mobile Muster and diversify into community programs like collecting reading glasses to be distributed to those in need, and bread clip collections to raise money for wheelchairs.

“In fact, the list of recoverable streams continues to grow as technology improves and companies partner with manufacturers to accept their products to be recycled, as long as they are collected in single, non-contaminated steams.”

The ability to customise a recycling hub was one of the key principles for the development of Source Separation Systems’ Recycling Wall Hub. 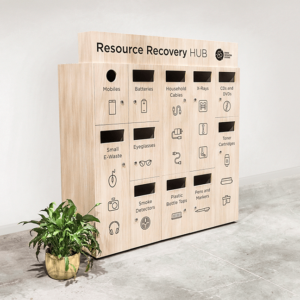 The hub is a modular design, available in a medium tower to collect five waste streams or a large tower of six streams. Housing either 60-litre or 24-litre collection containers, the hubs are designed to be banked together, providing as many collection streams as required.

The hubs are made of commercial melamine, which can be customised to match existing joinery in a location. Each stream includes vinyl labels designed by Source Separation Systems’ inhouse graphic designer. 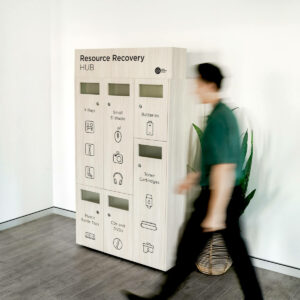 “Councils are focused on removing problematic e-waste items from their landfills, given the environmental dangers. As such, our Wall Hubs function as an educational platform as well as a collection centre, encouraging residents to collect and bring in their domestic e-waste items.

She says the drivers are a little different in the commercial space.

“We tend to deal with leaders in sustainability in the commercial segment. The drivers for their streams often come from site waste audits, however equally importantly, the Recycling Wall Hub is a symbol of their commitment to product stewardship,” Ellie says.

“They are really focused on employee and customer engagement, and so encourage the collection of recoverables related to their businesses. A good example is the medical clinics I talk to about glasses, which are often donated, as well as recycling items such as toothbrushes and x-rays. In contrast, in IT companies it’s more stationary, e-waste and cords. We have even had e-waste streams which are set to be repurposed as components for robot war games.”

Peter believes the shift to collecting more specific, single material streams will increase as the industry continues to evolve and recovery opportunities increase.